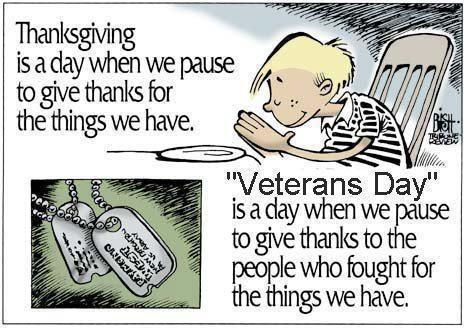 An Act (52 Stat. 351; 5 U. S. Code, Sec. 87a) approved May 13, 1938, made the 11th of November in each year a legal holiday—a day to be dedicated to the cause of world peace and to be thereafter celebrated and known as “Armistice Day.” Armistice Day was primarily a day set aside to honor veterans of World War I, but in 1954, after World War II had required the greatest mobilization of soldiers, sailors, Marines and airmen in the Nation’s history; after American forces had fought aggression in Korea, the 83rd Congress, at the urging of the veterans service organizations, amended the Act of 1938 by striking out the word “Armistice” and inserting in its place the word “Veterans.” With the approval of this legislation (Public Law 380) on June 1, 1954, November 11th became a day to honor American veterans of all wars.

So today and everyday Remember the 56 men who put everything, – property, lives and families – on the line for the something they didn’t even know would work……………..the concept of living by Principles.

They had the “security” and “safety” of England, the greatest nation in the world at the time and they chose something much much more valuable than that – Freedom!

So today and everday Remember those who serve and have served to protect our Freedom.  God Bless America!!!

And also Re-Member with this;

We hold these truths to be self-evident, that all men are created equal; that they are endowed by their Creator with inherent and inalienable rights; that among these, are life, liberty, and the pursuit of happiness; that to secure these rights, governments are instituted among men, deriving their just powers from the consent of the governed; that whenever any form of government becomes destructive of these ends, it is the right of the people to alter or abolish it, and to institute new government, laying its foundation on such principles, and organizing its powers in such form, as to them shall seem most likely to effect their safety and happiness.

–Declaration of Independence (by Thomas Jefferson, 1776)

Bill’s Background I’m just an average guy who’s learned a few things about Life, Success and Personal Development – thanks to some incredibly good and bad experiences during the past 25+ years. I’ve made many mistakes and have learned to combine down to earth values with a unique ability to distill complex concepts into simple powerful strategies which can be immediately applied to produce measurable results. In short; “I’ve traveled the territory, drawn a few maps and I’m happy to share them” I do not consider myself to be an “expert” and my work is never presented as the definitive doctrine on how you should live your life or what it takes to be successful in your business. I am a work in progress and if you were to you join me on life’s journey by hiring me as your coach or partnering with us in business – our learning will very likely be a two way street. In fact, I expect it to be. “What you know dies with you – what you DO leaves a legacy” I was raised in upstate New York and eastern Pennsylvania. This rural upbringing is strongly reflected in my personal value hierarchy: Faith > Family > Friends > Fitness and Finance. Education and a commitment to continuous improvement are next on the list. All these and more are strongly reflected in my coaching, teaching, writing and speaking. While growing my private practice I also taught Orthopedics and Neurology at both the undergraduate and graduate level, produced a TV show on fitness, appeared on numerous radio and TV programs, authored numerous journal articles, chapters for medical texts, served as vice-president of my state medical association, and started a family. I have had the honor and privilege of consulting with and coaching a diverse population of people from royalty to prisoners, from children to CEO’s, from amateur to professional athletes from 41 countries and people of almost every race, creed, religious belief and nationality. I am passionately committed to contribution and Living With Intention. Part of my philosophy is to think globally while acting locally. I am a very active member of my church, as well as several community organizations. After church, my favorite philanthropy is the Nourish the Children. I have also performed extensive volunteer work for both the Anthony Robbins Foundation, and the Make a Wish Foundation. Why become an Entrepreneur? I became an entrepreneur because after 5 years of Health Care Reform I found I was merely an employee of the various insurance company’s I was interacting with. I became painfully aware I was working more hours for less money and that what I was doing wasn’t working! At the same time my beautiful daughter, Casey, was born. This was the first time in my life I started to think about my future, and of course hers. When children come into your life, your perspective changes from Firebirds and Ferrari’s to Gymnastics, music lessons, horseback riding and so forth. Suddenly, I had to think longterm – was what I was doing going to provide all the things that a father wants for his children? In October of 1998 I started my entrepreneurial endeavors on a very part time basis. Less than 3 months later my New Year’s Resolution was to put my practices up for sale. In May of 1999 I sold them and began to work on my dreams and my fortune on a full time basis. From there, it took me a full five years to get to the point where I could do whatever I wanted to do. Along the way I wrote my first book: “Morning Moments”…as well as learning a few things about money, transitioning careers and happiness. I am happy to share what I know, in short again; “I’ve traveled the territory, drawn a few maps and I’m happy to share them” In summary; Transitioning careers was the hardest challenge I’ve ever taken up and it’s been the most rewarding! In so many ways, this is the very best personal development seminar I’ve ever taken because I met mySelf and my wife in the process…and every perceived adversity was worth it. Today, with my wife Julie, we “get to” pay the gift forward by coaching, mentoring others through the same process. There is no greater pleasure than showing others how to earn their freedom and then observing what good they do with it. Life Will Never Be The Same
View all posts by Dr Bill Toth →
This entry was posted in Holiday Messages, Personal Development. Bookmark the permalink.